Since 2016, the Steven Turnipseed, PA-C Veterans Award has been given to military veteran MEDEX Northwest physician assistant graduates in recognition of their service to country, class and community. This year was no exception: Robin Morris of Anchorage Class 10, Chris Hilton of Seattle Class 52, Coty Holm of Spokane Class 22, and Sarah Clark of Tacoma Class 6 were each awarded the Turnipseed Award.

The namesake of this award, Steven Turnipseed, PA-C, has a firm place in the history of MEDEX Northwest and in the successful establishment and growth of the PA profession itself. Mr. Turnipseed was the sole African American among the first members of MEDEX Class 1 when it was founded by Dr. Richard Smith, who recruited him, in Seattle in 1969.

Like all of his classmates, Turnipseed came to MEDEX as a military veteran. For him specifically, it was the U.S. Army, where he served—among many areas and in many ways—in Thailand in the Special Forces Medical Counterinsurgency Program. His special achievement there was recognized by his commanding officers; particularly his ability to work with unfamiliar people in a remote area of a foreign place while maintaining the highest degrees of professionalism and performance of duty.

As he completed his time with MEDEX, Turnipseed’s preceptorship at the Group Health Cooperative in Seattle soon led to a full-time position, which in turn led to a good number of successful years as a Group Health clinic and hospital administrator. Over the course of what is now a 50-plus-year career, marked by achievements, recognitions and awards of his own, Turnipseed became one of the founding members of both the Washington Academy of Physician Assistants (WAPA) and the Board of Directors for the American Academy of Physician Assistants (AAPA). Mr. Turnipseed continues to this day to serve his community in California as a healthcare provider and leader, as he has done in many communities around the country and the world.1

Following on their October 2020 graduations, we caught up with two of this year’s recipients—Robin Morris and Coty Holm, both U.S. Army veterans like Mr. Turnipseed—amidst their busy post-graduation lives, and asked them to share their stories and look ahead to what’s next for them as they begin their journeys as full-fledged PA-Cs.

Robin Morris was born and spent most of her childhood in Grosse Pointe Farms, MI; at 15, she moved to Oregon where she graduated high school. In 2005, she joined the U.S. Army as a 91WN9: Health Care Specialist with a secondary specialty of Physical Therapy Specialist.

For the first five years of her career, she served in the Army on active duty as a Physical Therapy Specialist in Heidelberg, Germany, during which time she was also deployed to Iraq and Kosovo. For the last five years of her active-duty career, she served as a Health Care Specialist/Combat Medic at Fort Carson, CO and deployed to Afghanistan and Kuwait. While there, she served as a line medic, a BN (battalion) aid station medic, and role 2 NCOIC (non-commissioned officer in charge).

The inspiration to become a physician assistant began with her first true experience as a line medic when she was deployed to Afghanistan. While there, she worked with a PA from whom she learned a great deal when it came to both medical skills and being the consummate professional. “He was always calm, patient, and willing to teach,” she recalled.

“When we were learning to do chest tubes or doing chest tubes, he would stand behind us and watch, and when [you] needed assistance, he would stand next to you and calmly whisper what you needed to do next. He never yelled; he was always advocating for the patients and pushing for us to be better.”

As she was exposed to more PAs during her time as a medic, she observed more of these characteristics, and felt a connection with them. “I want to advocate for my patients, for my staff, and I love to educate and train,” she said. “PAs do all that and have such a rich background and future; I felt immediately drawn to be a part of this community.” 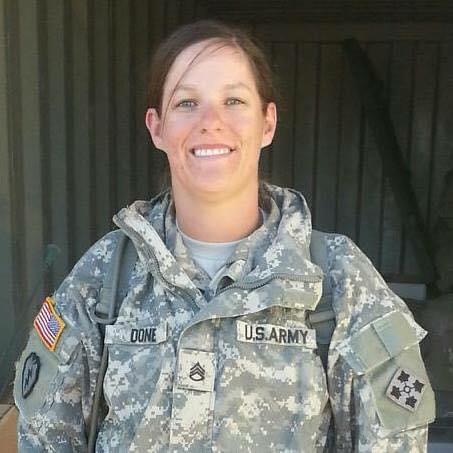 She left active duty in 2014 and moved to the U.S. Army Reserves in Denver, CO where she served as the medical advisor with a training unit. She then moved to Alaska in 2016 where she joined an Army Hospital Unit. Somewhat similarly to Steven Turnipseed, one of her jobs entailed going to Thailand to train the Thai Army in “combat medicine,” where she was assigned as the unit operations NCO (non-commissioned officer). After beginning her PA education in the MEDEX program at our Anchorage, AK campus, and after 15 years of service in the U.S. Army, she retired in January 2020 for medical reasons, although she says somewhat wistfully, “I loved my time I served my country and miss it every day.”

Now that she has graduated from MEDEX, her sights are set once again on Colorado, where she has spent a significant portion of her career already. Currently, she is in an interview process for the Advanced Practice Provider (APP) Surgical Fellowship Program – Surgical Critical Care Track at the University of Colorado Anschutz Medical Campus. The mission of this program is “dedicated to educating, training and recruiting APPs in surgery as to successfully integrate them into a career in surgery, while improving the life of every surgical patient now and in the future.” This fellowship also provides “opportunities for APP fellows to engage in research and quality improvement initiatives within the critical care setting” and is focused on training Physician Assistants and Adult Acute Care Nurse Practitioners who are interested in critical care, specifically specialties involving surgical critical care.2

Coty Holm was born in Butte, MT and grew up in Deer Lodge, MT and Minot, ND, and is the oldest of four kids: three boys and a girl. He has been married to his wife Andrea for 15 years and they have three kids themselves: two boys in elementary school and a daughter in middle school.

His medical career began when he became an EMT-B/firefighter at a city department, where he worked for five years beginning in his senior year of high school. During his last two years as an EMT, he also started working as a medical assistant (MA)/phlebotomist at a rural, single-provider primary care practice, after which he spent a year and a half working as an MA at a hospital-based wound healing center.

His military career spans the last 11 years and counting. In 2009, he enlisted in the U.S. Army Infantry and in 2012, he joined his battalion’s sniper section, subsequently graduating from U.S. Army Sniper School in 2014. He was then sent on a 12-month combat deployment to Iraq, followed by several training deployments to Europe and other allied nations. He currently serves in the Washington National Guard with the HHC 1-161 sniper section. With one year left on his second six-year contract, he is now contemplating leaving the sniper community behind and taking a commission as a PA in the Army Reserves or National Guard. This may very well be the ideal culmination of his medical, military and educational experiences, all of which prepared him for success as a MEDEX student, and now graduate. 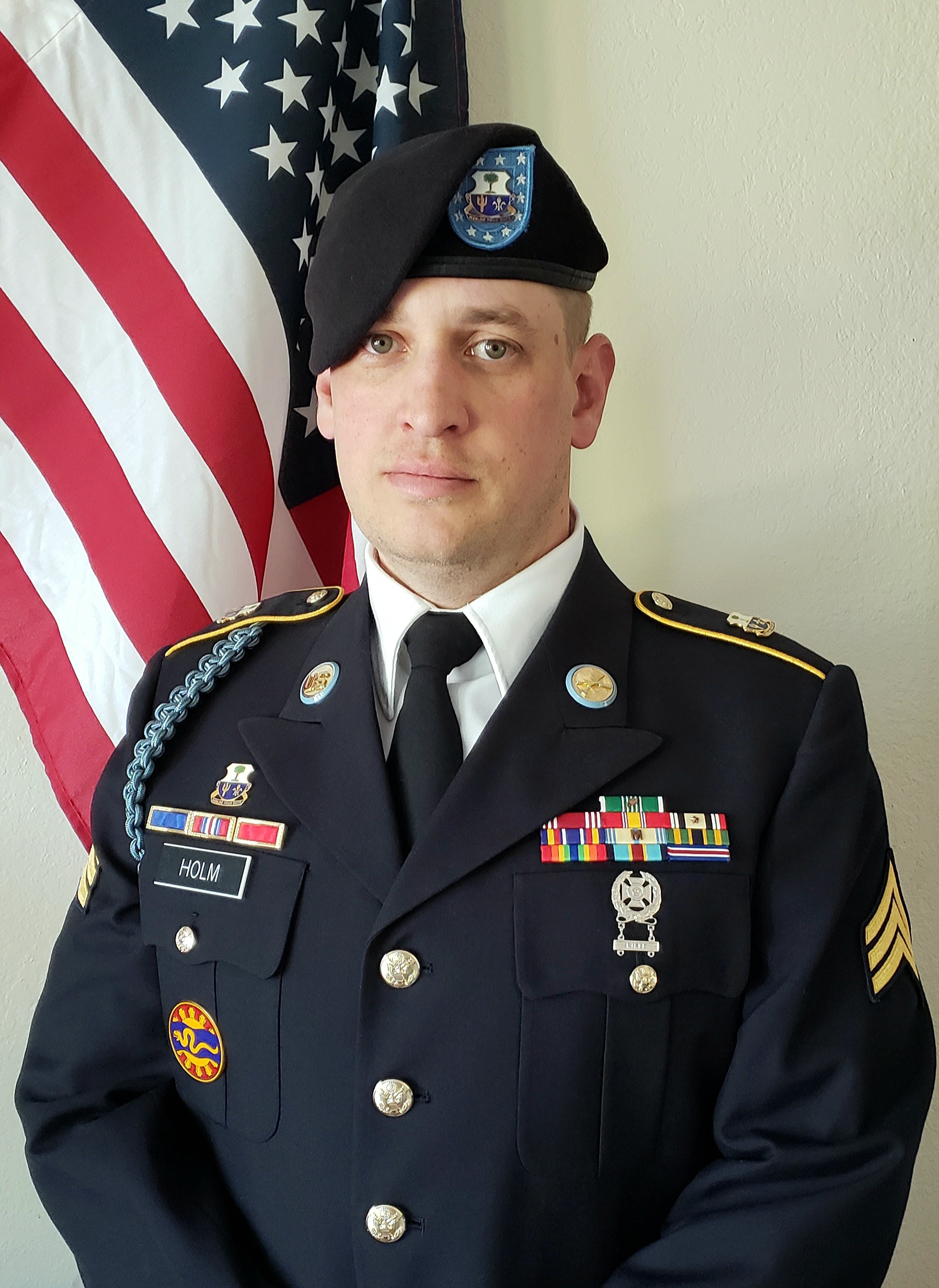 “I always enjoyed medicine and my days as an EMT-B and knew I wanted to go into the field after the Army,” he said.

“My dad is an ER physician; he attended OHSU [Oregon Health Sciences University] for medical school and residency in Minot, ND. He was one of the main reasons I chose to be a PA, as he was the first person to tell me about PAs, suggesting I look into it while I was completing my pre-med at MSU [Montana State University] in Bozeman.”

Coty was originally planning to follow in his dad’s footsteps and become an M.D., but he felt that the PA career was a better fit for him as it would allow for a better balance of family and career than many physicians are afforded. He emphasized that “being available and involved with my three kids throughout their middle school and high school years is a number-one priority for me.”

Coty began his pre-med education at MSU Bozeman at 28 years old. “Having recently returned from a year deployment to Iraq, the term ‘non-traditional’ student seemed like an understatement,” he quipped. “I was highly focused and motivated to say the least. I volunteered with several veteran groups on campus, including as a tutor for other veterans in math, A&P [anatomy and physiology], biology and physics. After completing the CASPA [Centralized Application Service for Physician Assistants] my senior year, I was able to go directly to MEDEX after graduating from MSU with no gap year.”

And there won’t be a gap now that he is a MEDEX graduate, either.

“I got an amazing job at the International Heart Institute of Montana as a surgical PA-C with their vascular surgery team. I got to do two clinical rotations in Missoula, Montana—cardiology and emergency medicine—which was how I met the vascular surgery team. Both of the vascular surgeons are currently serving in the Army Reserves and were excited that I was a Montana native and Army veteran that wanted to return to Montana to practice medicine. They offered me a position during my [second preceptorship] rotation and I was excited to accept the job; it was a great feeling to have a job before graduation.”

Coty graduated with MEDEX Spokane Class 22 on October 4th, passed the PANCE (Physician Assistant National Certifying Exam) on October 14th, received his Montana medical license on November 5th, and will start working on November 23rd. “We are also closing on a house in Missoula and [we] move in three days before I start at the hospital. So, things have been crazy the last few months, but I am very thankful for how things are going. Years of hard work are starting to pay off.” He and his wife are also currently homeschooling their three children.

It’s clear that what inspires Coty and keeps him going comes down to one thing: family.

“‘Today is the first day of the rest of your life.’ I’m not sure who originally said this, but I have only ever heard it from my dad. He started telling me this during my 8th grade year and it has been a source of motivation for me ever since. My dad not only said this to me, but he also lives it every single day. I wouldn’t be the man I am today if it wasn’t for my dad. I am very thankful for his mentorship and support throughout all the difficult trials in my life. Iraq, sniper school, and PA school are just a few things that would have been insurmountable tasks without his support. Thank you, Dad!”

And thank you Robin and Coty for sharing your stories. Thank you also to you both, along with Sarah, Chris, and all MEDEX veterans past and present (as well as your families and support teams) for your service to our country and your communities. Like Steven Turnipseed, you are symbols of the MEDEX Program; you inspire us all, and the world is a better place because of you.