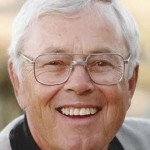 Amos “Pres” Bratrude (1930-2016), a family physician who practiced for many years in Omak, WA, is one of the individuals most remembered for his role in the start of the WWAMI program. His colleagues in this endeavor included Gus Swanson, Roy Schwarz, Jack Lein, Bob Van Citters, Tom Morgan—and many others.
While medical training was typically offered in academic settings, there was widespread concern that focused training in urban academic institutions would not encourage graduates to pursue community practice. Although it was known that where a physician completes residency training is the best predictor of his/her practice location, the logistics of alternatives to academic training were daunting.
At a meeting of the Washington State Medical Association in 1970, key individuals brainstormed and debated. Bratrude is widely remembered for the single line that led to a revolution in community-based medical training: “Send me the residents and I’ll train them.”
14899
Out of this declaration and the commitment of Bratrude and many others, a network of education and training centers was established throughout Washington, Alaska, Montana and Idaho (and later Wyoming), with physicians serving as preceptors in their practices.This was the start of community-based medical education in the United States. Today, nearly 5,000 physicians throughout our five-state region participate in and contribute to the WWAMI program.
While the focus of training shifted to medical students early on, it later incorporated both levels of trainees—as it does today. Bratrude made good on his promise and became one of the many outstanding physicians who welcomed trainees into their practices.
Bratrude died peacefully in Wenatchee on April 2, 2016. We are indebted to him for his role in starting what is widely recognized as the largest and most successful regional medical education program in the nation. Visionaries like Pres Bratrude define what is special about our WWAMI region—people who seek and find solutions that improve health for our communities.