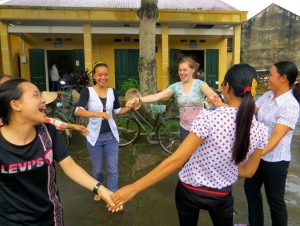 Congratulations to Brianne Huffstetler Rowan on being named a 2016 Pisacano Scholar! Each recipient is noted as an outstanding medical student who has made a commitment to enter the specialty of Family Medicine. Read more about the Pisacano Leadership Foundation here.
Brianne is a 4th-year medical student at the University of Washington School of Medicine (UW). She graduated from Juniata College with a Bachelor of Science degree in Global Health and French. She also recently completed her Master of Public Health (MPH) at UW’s School of Public Health as part of an NIH-sponsored Pre-Doctoral Multidisciplinary Clinical Research Fellowship.
At Juniata College, Brianne was a two-time recipient of the Community Contribution Award, which recognizes students for outstanding service to the local community, and was one of two students to receive the Clarence R. Pentz Pre-Medicine Humanitarianism Scholarship during her junior year. Throughout college Brianne participated in the Bonner Leaders Program, a nationwide program in which a select group of students commit to weekly meaningful service and participate in leadership and service trainings. In this role, she completed two years of part-time AmeriCorps service and volunteered for three years as a gymnastics coach at a local community youth center. She also served as the president for the Juniata College Habitat for Humanity chapter, co-lead for several Relay for Life teams, and the volunteer coordinator for the Pennsylvania Special Olympics. Brianne was also part of the Juniata College Dance Ensemble and played violin in the Juniata College Orchestra.
In medical school, Brianne was named to both the Alpha Omega Alpha and Gold Humanism Honor Societies during her junior year and currently serves as secretary and Secretary General (president) for these UW chapters, respectively. She has been awarded the University of Washington’s School of Medicine Distinction in Service Award yearly for four years. Brianne has served with several free clinics in Seattle, Habitat for Humanity and Girls on the Run. She volunteers with the ROOTS young adult homeless shelter and has served for two years as the volunteer coordinator for UW student teams serving weekly breakfasts at the shelter. Brianne has also been an integral part of UW’s Family Medicine Interest Group, and has served for three years as the co-chair of Tar Wars, an American Academy of Family Physicians tobacco and smoking prevention program for 4th and 5th grade students. The program now reaches over 300 students yearly and was ranked 2nd place nationally in 2014 and 3rd place nationally in 2016.
As part of her MPH program, Brianne spent a summer in Vietnam working with Vietnamese medical students to develop peer-to-peer support groups to promote appropriate infant and young child feeding practices in rural areas. Her MPH thesis research focused on workforce needs in antenatal care clinics in Côte d’Ivoire. Brianne spent six of the last nine summers in a rural village in Northern Thailand volunteering with The Expedition Club, an organization that brings American and Thai youth together for cross-cultural community building and English language instruction and learning. She continues to serve as a board member and plans to return to the same village this spring.
Brianne is excited for the next stage of her journey in family medicine and for the opportunities to build compassionate, longitudinal relationships with patients and families. She hopes to dedicate her life to creating, improving and providing comprehensive primary care programs with strong maternal-child health services in rural areas throughout the world.