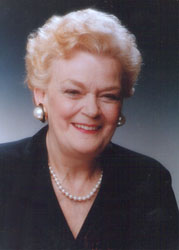 The Helen D. Cohen Endowed Professorship in Family Medicine was established in 2012 to enhance the University’s ability to recruit and retain distinguished faculty in the Department of Family Medicine and to honor Helen Dora Cohen.
Helen Agerup Cohen was born May 31, 1921, and passed away Nov. 16, 2011. She grew up in Everett, Wash, with three sisters and one brother. Helen attended Everett schools, graduating from Everett High School in 1939. She had three children with her first husband, Frank VanHemert. They divorced in the early 1950s. After her marriage to Morris Cohen, they moved to Ballard, where Helen worked as a meat wrapper for Ballard Safeway. She began faithfully saving a portion of each paycheck. As a result, over the years, Helen’s investments became substantial, and she left the majority of her estate to the UW School of Medicine. Helen lived in her Ballard home until her death at the age of 90.

If you are interested in supporting this work, please make a gift.